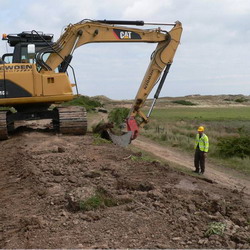 The turbines were delivered to the site by barge and tracks from the marine landing were upgraded. The site of the windfarm is arable fields with drainage ditches. These were crossed by new and upgraded access tracks.

As ECoW for the project, WFE oversaw the implementation of habitat management via vegetation clearance to deter water voles and reptiles from ditch crossing points and on the sea wall near the marine landing.

We also oversaw the demarcation of buffers around key features and the execution of mitigation strategies for badger, water voles and reptiles. As the site was near an SPA, observations on brent geese were conducted during the delivery of the turbines, with the potential to modify the deliveries to prevent any disturbance.

All works were completed on site and the wind farm is operating. WFE are now involved in post-construction monitoring of the development.