WFE was commissioned to undertake a study of foraging wintering birds on the River Deben Estuary SPA (Special Protection Area) in Suffolk, focusing on a particular area where a freshwater flow was pumped from a sluice at night into the river from surrounding arable land. Natural England were concerned that plans to redirect this waterflow away from the estuary may impact non-breeding waterfowl species such as brent goose and redshank for which the Deben is an internationally important site. Water birds have been found to preferentially associate with freshwater flows over mudflats due to accessibility of fresh water for bathing and drinking and an increase in invertebrate prey densities. 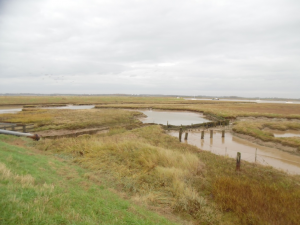 The study compared the ornithological importance of the outfall site, which has intermittent flowing freshwater, with two control sites, one comprised an area of mudflat with no freshwater influence, while the other control was an area of mudflat with a permanent freshwater gravity flow. Two nocturnal surveys and one daylight survey were conducted per month between November and March on all three areas and involved the counting and identifying all bird species present with the assistance of thermal imaging cameras.

The study discovered that the area with the permanent freshwater flow hosted a significantly greater density of birds than the other two sites, which both had a very similar density of birds associated with both the nocturnal surveys and diurnal surveys. It was concluded that the site with the intermittent freshwater water flow had a negligible influence on the local bird communities providing equivalent habitat to a creek with no freshwater input and therefore the removal of the water flow would have no negative impacts on the wintering bird populations listed as interest features of the Deben Estuary SPA.

Who is an Ecologist?

Having been working in this field for a considerable time, and being in the position…