WFE was commissioned to inspect a former Methodist chapel and associated buildings in Norwich for bats. A previous inspection by another consultant had found no bats, but small amounts of droppings in the roof void of the main chapel building. The consultant had concluded a development licence would not be required in view of the works undertaken, but the plans had since changed to include intrusion into the roof void. 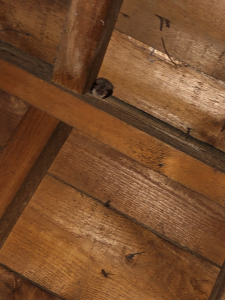 A brown long eared bat roosting on the ridge beam

The exterior of the buildings was inspected by eye, with a full photographic record made. The complex nature of the building layout meant that certain parts could only be viewed by ascending exterior ladders to view roof sections. On the inside, the very high internal ceilings resulted in long ladder climbs, but the roof voids were largely boarded out.

The main roof void contained a single brown long-eared bat, characteristically roosting on the ridge beam. The finding of the bat gave client some certainty in terms of a timetable for renovation of the building and helped to clarify the licencing requirements for the development.

Bats in a Scheduled Ancient Monument

WFE was commissioned to conduct bat surveys at a Scheduled Ancient Monument in West Norfolk.…

A new water pipeline at Thetford