The works to repair and enhance the flood defences at Burnham Overy, and to repair the footpath through to Burnham Overy Staithe, were successfully completed in July 2011. The works were subject to delays as a result of the presence of natterjack toads and common lizards. A total of 338 lizards, 10 natterjack toads, 129 common toads, 10 common frogs and 6 smooth newts were translocated during the course of the project.

The natterjack toads and common lizard were moved into the dunes while the other amphibians were all released approximately 1km south of the start of the works area in the grazing marsh. 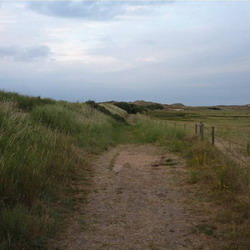 View prior to work

The works at Burnham Overy were initially due to start in 2009, but were delayed as a result of a desk study that revealed the presence of natterjack toads on the site. It was too late in the 2009 season to survey for natterjack toads, and Natural England had also advised restrictions on the acceptable timing of the works in order to avoid disturbance to the wintering birds on the grazing marshes.  The project was necessarily delayed until the 2010, when it was anticipated that surveys would establish the level of presence by natterjack toads and mitigation to translocate reptiles and natterjack toads would commence.

In readiness for the start of works in 2010, reptile translocation from the bank was started (221 lizards were caught and translocated to the dunes) and a vegetation survey was conducted. The vegetation of the banks was cut short to reduce the habitat value for lizards and displace the majority of the population. The shrubby sea-blite and other potential refugia were removed from the bank and used to create an artificial reptile hibernacula at the back of the dunes.

The works to the bank were delayed, and did not start in 2010 Fortunately an agreement with Natural England was reached to remove the bird-related timing restrictions placed on the works so that these could be started in the spring of 2011. As the site is regularly disturbed by large numbers of walkers, dogs and cyclists, it was agreed that the increase in activity due to the works was unlikely to have a significant additional detrimental effect on nearby breeding birds. 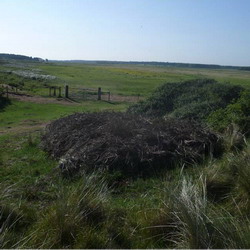 Dry weather reduces the activity of natterjack toads significantly, and owing to the extraordinarily dry spring in 2011, the natterjack toad surveys and mitigation was again delayed. However, work continued to translocate lizards and to maintain the vegetation cutting to deter them from the bank. A further 72 common lizards were translocated in 2011 prior to the works.

Once the weather was suitable, torchlight searches for natterjacks began, and animals located on or near the bank were removed to suitable foraging habitat in the dunes.

61 natterjack toads were seen during the searches, which covered the bank and dunes. Of these 9 were on or near the bank and needed to be translocated.

The plan was to divide the bank into four sections. As each section was cleared of natterjacks and lizards, it could be signed off and the topsoil stripping could begin.

Works started in April 2011 on the end of the bank farthest from the dunes. The top soil stripping was overseen at all times by a minimum of two ecologists. 45 lizards were caught and translocated during the top soil stripping of the bank. 1 natterjack toad was unearthed in the last 50m of bank, right at the base of the bank in a patch of sand that was checked before being tracked over. 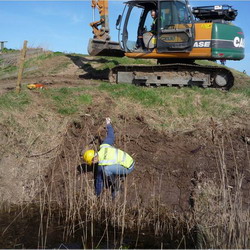 Bearded tit juveniles were seen in the reeds next to the haulage route confirming successful nesting during the works, and lapwing alarm calls from the grazing marsh indicated that they likely had chicks. Redshank, meadow pipit and little grebe were also heard calling from the marshes indicating that they were likely to be holding territories. Sedge warbler, blackbird, goldfinch, skylark, wren and reed warbler were heard singing this is also a sign that they were holding territories. Oystercatchers, spoonbill, black-tail godwits, little egret, tufted duck and shelduck were all observed foraging within 50m of the works corridor.

Access for this and future works to the bank was improved where the haulage route crossed over a dyke separating the grazing marsh from the foot of the bank. Improvements to the dyke crossing were mitigated for potential water vole impacts by cutting short the vegetation along the dyke edges to displace any activity. The digging works commenced with an ecologist on-site to monitor the turf stripping and to check any potential water vole burrows revealed by the gradual removal of soil.  No occupied water vole burrows were found during the works to prepare the dyke crossing. 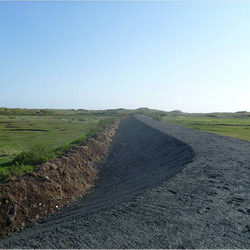 The topsoil stripped from the floodbank was used to re-cover the front face of the repaired bank, while new topsoil was imported to dress the rear face. The rear face was seeded with a seed mix drawn up by the Environment Agency. The front face was not reseeded as the topsoil used to cover it originated from the bank and was presumed to have a viable seed bank. Some of the topsoil from the bank was also used to cover the artificial reptile hibernacula.

Check out this video John made. Here is some footage of bats emerging from a…