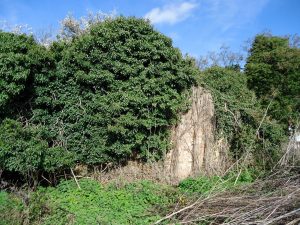 An extended Phase 1 Habitat Survey was commissioned for a site in south Norfolk. The site consisted of 0.3ha of unused land, including an old dilapidated building and several trees with bordering woodland, farmland and existing development. WFE undertook a site survey to classify the habitats to JNCC standards, and with the methods being ‘extended’ to include a general evaluation of potential habitats for any protected or valued species. The habitats on the site and surrounding area were classified, hedgerows were appraised, buildings and trees were inspected for bats and considerations were made concerning other protected species.

All the information we collected was mapped, supported by target notes and photographs detailing protected species issues. Further protected species issues were ruled out in this case and this fed into a final report for planning. If further surveys had been necessary, WFE could have produced what is known as a Preliminary Ecological Appraisal (PEA) and a final report produced after necessary surveys had been completed.

As part of the post-construction monitoring of a new wind farm in Northamptonshire, Wild Frontier…