WFE were commissioned to undertake a botanical survey along a section of the A47 trunk road to assist in scoping for dualling the road. A previous survey by a different consultant in 2016 had considered some areas of habitat to be of county value. WFE botanists revisited these areas and a number of other blocks of land within the proposal’s corridor, and recorded all plant species present, rating them for abundance. Several locally scarce species were found, and their locations recorded.

Hedgerows were surveyed, and assessed for their likelihood of being an important hedge from the botanical information collected.

Each area of habitat was then evaluated for ecological value. The aerial photography record and old maps were consulted to further inform the historical provenance of each area. From this it was possible to see that some areas had been incorrectly assumed to be ancient woodland of county value, while another previously un-surveyed area was determined likely to be ancient by WFE. 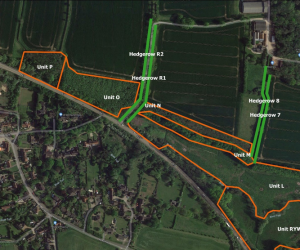 Badgers at a quarry site

NVC surveys of a SSSI