WFE have had a long involvement with a site in South Norfolk where fishery ponds had been excavated on a County Wildlife Site. As part of the remedial works for restoring fen habitat in the area, a large pond supporting water voles was to be filled in. 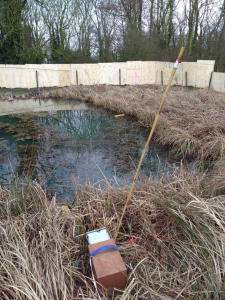 Water voles were trapped and relocated away from the construction area

WFE consulted an associate who was experienced in water vole mitigation, and we worked in partnership to provide water vole surveys and a mitigation licence for this work. This required habitat management (scrub removal) across the rest of the site to provide new water vole habitat. Once the licence was obtained the pond was fenced and water voles were caught using suitable trapping equipment. Trapped animals were moved to soft release pens elsewhere on the site. Following a period in which no water voles were caught, a destructive search was undertaken, and one further water vole was removed. Pond infill then took place, with no further water vole casualties.

We have monitored the site post infill, and noted continuity of water vole presence across the site. The infill area is showing signs of returning to good quality fen habitat, with water levels at or around ground level throughout. Managed areas of habitat are being used by water voles.